The Internet has a long memory...

Since Heath was kind enough to keep sharing , This week he reminds us that sometime social media can be hazardous to your business health, This is especially  true around business and taking a political, religious or other stance today.  Read on for some Insight.. Hat tip to Compliance Expert Health Wruble for the excellent content.

Social Media Pitfalls!
Heath Wruble
As a hiring manager, I see so many mistakes people make when interacting on Social Media, that I
sometimes want to cry. I am concerned that we tend to take our social media posts with a grain of salt
and do not really understand the long-term effect our posts and comments may have.
Although I believe social media is a great way to communicate with others and can be a fantastic
channel to advertise ourselves or our businesses, it’s also important to remember the societal and
career perils inherent to social media.
I recently received a resume in response to a job I had posted. The applicant had the education, the
background, was articulate, and appeared to have all the essential technical and business skills in a
desirable job candidate. After my phone conversation it was clear that he would not only fit into our
work environment, but could probably keep pace in our fast-paced environment and impress our clients.
Until, of course, we performed a simple google search of his name; up came pictures of him drinking
beer from a funnel at a party, as well as other pictures of him in less than professional settings. While
these types of pictures are certainly legal, and many of us have engaged in less than perfect behavior.
But were these the types of pictures we wanted to see as an employer? One might say these are just the
joys of growing up, which may be true, but one always must remember once a picture like that is out
there, it’s out there forever.
My friend’s daughter was preparing to apply to several universities. The family did all they could to
improve her chances. She volunteered at their religious institution on Sundays, tutored at the local Boys
and Girls Club, participated in her school’s soccer team, and had fantastic grades and scores on her SATs. 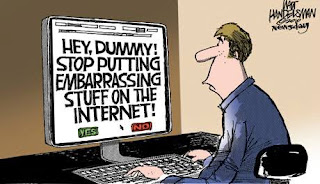 Unfortunately, they failed to review her social media accounts, and there were a few pictures and
twitter posts featuring uncompromising pictures of typical teenage activities, such as, well let’s just call
them… party photos and leave it at that, and some controversial twitter comments, which would be fine
if she wanted to be a model or political commentator for one party or another. Most exclusive schools
do not want to take on these adventurous types of students, they want the studious student. The
colleges she applied to did check her social media. She did not get accepted into her first or second
choice schools; the social media postings may have played a role.
I was recently reminded of an article in the NY Post I read by Bethany Mandel, the title really stood out
to me – “ Mark Zuckerberg doesn’t post about his kids on social media – and nor should we ”. The
premise behind the article is that if the founder of Facebook was unwilling to post personal content such
as pictures of his children and his private life, perhaps it is a good idea if we, as the consumers of the
application do the same.
Bill Gates and Steve Jobs limited their children’s access to technology . Even Tim Cook famously said in an
article in The guardian : “I don’t have a kid but I have a nephew that I put some boundaries on. There are some things that I won’t allow; I don’t want them on a social network.”
With that, allow me to remind you of some of my famous Social Media No-Nos!

Additionally, even if one isn’t looking to enter the workforce or maintain his or her job, we must always
be cognizant of our social media activities for personal safety reasons. These activities affect us in other
ways, they help make us a target or worse. Some helpful ideas to keep in mind whether you are a
teenager or a family, these social media no-no’s should be discussed as a family and followed.
I admit I have a social media account; my accounts are locked for my friends only and I tend to only
allow family and close friends access. I rarely post pictures and use my account to communicate and
keep up to date with those friends.
Remind your children of the social media pitfalls, you do not have to go far; there are countless news
stories of children not being accepted to colleges or prestigious jobs because of something silly they did
ten years ago.
Set your privacy settings to the strongest levels as possible, as an example, only friends can see your
information, delete your history (Facebook has an option for that now), and don’t check into locations
such as restaurants, amusement parks, etc.
Education about social media and the pitfalls is essential to living a more normal quitter lifestyle.
Remember the less others know about you and your family the better off you and your family will be.
For more information on TSH or MDS call The Systems House, Inc. at 1-800- MDS-5556. Or send a message to sales@tshinc.com
Click here and tell us how we can help you with your business solutions.